Women to the helm! | GotoSailing

Women to the helm!

When you talk about boats, many people still imagine a man on the helm, and a beautiful woman next to him, gazing in the distance. But, actually there are so many women buying their own boats, renting yachts ‘girl-to-girl’ to cruise the seas by themselves… Don’t you also think it’s high time to take over the helm? Here are some of the inspiring sailor women of the past and present… 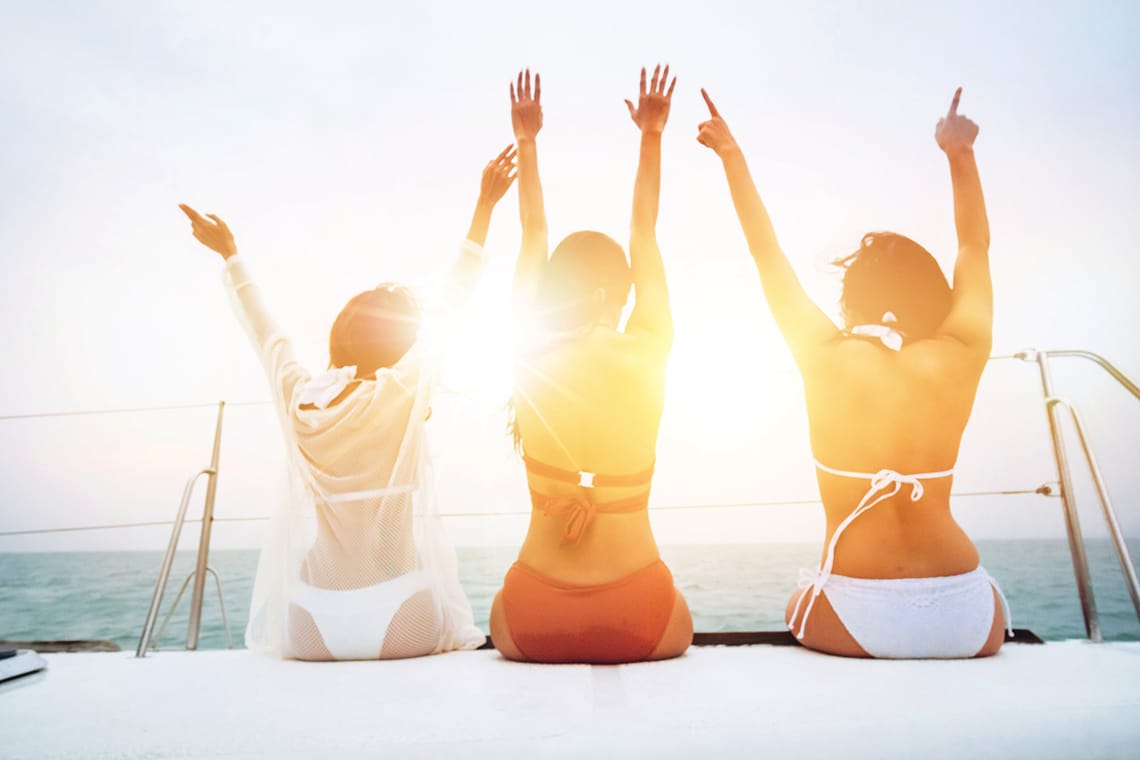 Women to the helm!

When you talk about boats, many people still imagine a man on the helm, and a beautiful woman next to him, gazing in the distance. But, actually there are so many women buying their own boats, renting yachts ‘girl-to-girl’ to cruise the seas by themselves… Don’t you also think it’s high time to take over the helm? Here are some of the inspiring sailor women of the past and present…

In navigation, especially today, intelligence and organization skills are much more important than mere muscle-power. So it’s exactly a ‘woman’s job!’ Sailing a boat is a wonderful feeling and it suits a woman so well that you could say it’s ‘tailored’ for you. If you haven’t learned to sail yet, keep in mind that you can always hire a boat with a captain. We highly recommend the freedom of a sailing holiday and the experience of taking the helm.

The prejudices haunting ‘seamanship’ root in traditions, beliefs and superstitions dating back to ancient times. Although some of the obstacles in a woman’s way are now lifted, the shadow of those prejudices still remain. The fact that girls aren’t encouraged to become sailors when they grow up, together with most men’s stubbornness about letting women take the helm, are among the main factors that distance many more women from sailing on their own.

The history of navigation is like a vast sea that you want to dive deeper as you learn more about, it’s an ocean of adventures, passion and all sorts of exciting stories. But almost all the characters are men… Luckily, there have always been brave, pioneering women throughout history. From the days it was believed that ‘having women on board would bring bad luck’ to our time, they continue to inspire all sea-loving women.

For centuries, women were only admitted to ships as passengers. And, it was forbidden for women to step into the deck. The reason behind the ban was the sailors’ superstitious beliefs that women would bring bad luck to the ship, which was also seen as a female being, referred to as ‘her.’ Well, ships are still seen as she-beings, but luckily, nowadays most people don’t believe that a ship may be jealous of other females, consume herself with jealousy and sink because of that!

Some because of financial problems and some with their passion for adventure, many women have dedicated their lives to the marine world. One of the most famous sailorwomen to mingle in with the male crew disguised as a man, was Mary Read, born in Britain in the end of 1600s as the illegitimate daughter of a captain. She was brought up in disguise of a boy by her mother, so that she could enjoy reversion. After fighting the French Army for nine years, Mary Read went to the Bahamas and became a pirate. In 1720, Mary’s route coincided with that of Anne Bony, another pirate woman of the time. The two pirates ransacked the Bahamas together. Anne Bony was the lover of the ship’s captain, the infamous pirate John Rackham. Unlike Mary, Anne had never hidden her identity as a woman.

One of the first woman tugboat master with a license was Eliza Thorrold. When her husband died, Thorrold continued to run his steam powered tugboat, and applied for a license because of the legal obligation to have a licensed captain on all tugboats. When Eliza Thorrold told she couldn’t afford to hire a captain and that she had to work for her five children, the authorities gave her a chance. This is how, in 1897, Thorrold got her tugboat master’s license…

Legendary Yachtswomen of Our Time

There are many yachtswomen today. But, we can fairly say that some have become more inspiring for others. Naomi James is one such inspirational woman. The first mariner woman to make a world tour passing through the Cape Horn, Naomi James returned to New Zealand on June 8th, 1978, after a 272-day voyage. She inspired many other women to circumnavigate on their own.

Ellen MacArthur might be the most famous and fastest of the legendary yachtswomen. The British mariner set sail from France coasts in 2004, when she was 28, and completed her circumnavigation of the globe in 71 days, 14 hours, 18 minutes and 33 seconds, breaking the world record for fastest solo circumnavigation.

Following MacArthur, Laura Dekker became a controversial name by completing her solo world-tour when she was just 16. Although the Dutch authorities objected to her plans to sail around the world because of her young age, after a long battle at the court, Dekker succeeded to set sail on August 2010. Completing her tour around the world on January 2012, she got her name on the Guinness Book of Records.
And Jeanne Socrates… She’s a special person who proved it to all the world that you’re never late for your dreams. The British sailor cruised around the world without stopping in 2013, when she was 70. ‘I’m not really an armchair and slippers person,’ said Socrates, after her 259 days afloat.

As Gotosailing.com team, we hope to see more yachtswomen at the helm…

If you have any story, insights, advice, tips or experience to share with fellow sailors, please write it down and email to [email protected]. We will publish it on our pages with your name!